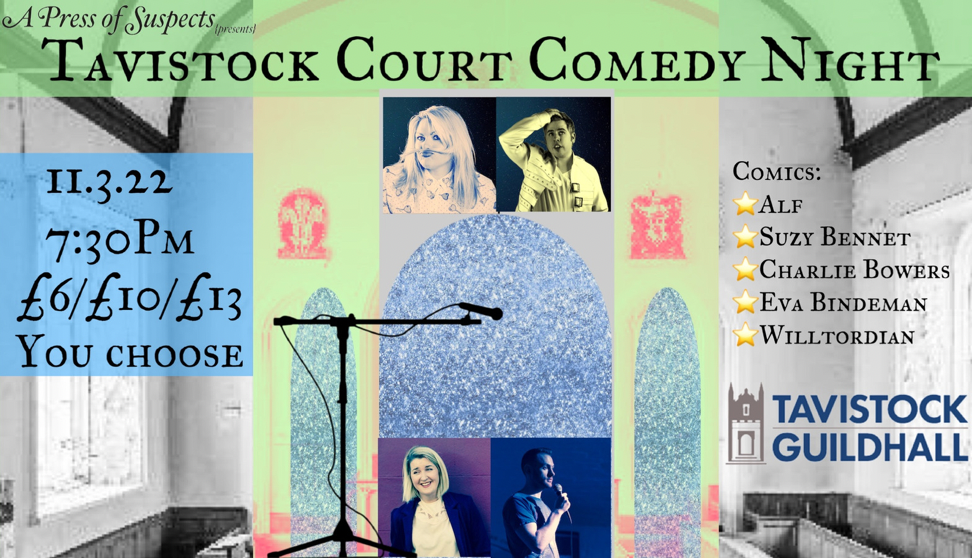 Comedy in Tavistock is back! Plymouth based promoters “A Press of Suspects {presents}” bring their unique brand of comedy night to good ol’ Tavy! Taking place in the unusual setting of the old Courtroom at the reopened World Heritige Guildhall on the 11th March.

This night promises to be a bundle of laughs with a varied line up. With a “choose your own price” ticket system (starting at a tiddly £6) you’d be a fool to miss out . All hosted by the anarchic Willtordian Ballorian Edwardian.

ALF: A gloriously silly and hilarious one-liner prop comic. A multitude of achievements under his belt including: ‘So You Think You’re Funny’ finals in Edinburgh, “Standup for Cider ” competition winner. In 2018 he auditioned for Britain’s Got Talent at the London Palladium and received a Standing Ovation from the Judges and the Audience. In 2019 he was a finalist in the UK Pun Championships and the World One Liner Championships. Unmissable.

Suzy Bennett: A born and bred Plymouthian! Former Butlins Redcoat and proud Devonian Suzy ‘accidentally’ won an award on her 6th gig and has kept the laughs, and her accent, going strong ever since, performing around the UK as well as overseas. She is the voice of the ‘Plymouth Trails’ Tour app and was recently named as one of the ‘50 Coolest people from Plymouth’ by the Evening Herald (It was in no particular order so she assumes she came third after Dawn French and Wayne Sleep)

Charlie Bowers: Dry, dashing and deliciously deadpan. A rising star of the high quality Bristol comedy scene. Charlie was recently announced the winner of the legendary Stand Up for Cider competition. Wowsers.

Eva Bindeman: Another star of the Bristol comedy circuit, Eva has begun headlining nights in and around the South West and you will soon be paying big money to see her!

In a time where we are all looking for a little escape, this show is a great way to have a giggle and actually meet up with friends in real life.