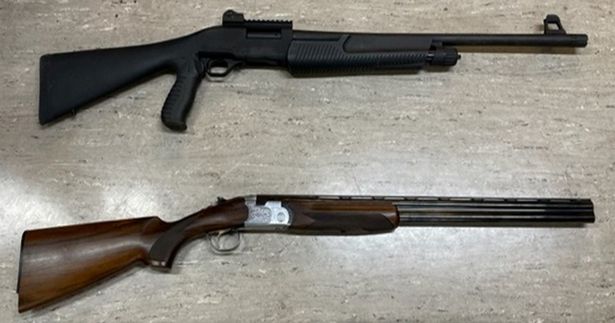 Police have released an image of the pump-action shotgun Jake Davison used to kill five people in Plymouth in 2021. Davison, 22, killed his mother Maxine, 51, after a row at their home in the Devon city on the evening of August 12.

He then shot dead Sophie Martyn, three, her father Lee, 43, Stephen Washington, 59, and Kate Shepherd, 66, in the Keyham area of the city. Davison, an apprentice crane operator, turned the black Weatherby pump-action shotgun on himself before armed police officers reached him.

The image has been released to show the difference between Davison’s weapon and a standard sporting shotgun, as well as the similarities between Davison’s gun and a police-issue tactical single barrel 12-gauge pump-action shotgun. An inquest in Exeter has heard Davison applied for a shotgun certificate in July 2017, with one issued by Devon and Cornwall Police in January 2018 that was valid for five years.

An image of the weapon was shown to the jury on Wednesday while superintendent Adrian Davis, a firearms expert with Warwickshire Police, gave evidence. Devon and Cornwall Police revoked Davison’s licence and seized his shotgun in 2020 after Davison assaulted two teenagers in a park, but returned them in 2021 – weeks before the killings.

On Thursday, jurors were told that returning a licence after it has been revoked is classed as a “high risk decision” in guidance issued to police in 2016. Superintendent Adrian Davis gave evidence at the inquest about decisions classed as high risk when granting, revoking or returning a firearms or shotgun licence.

He described how Davison would have used a standard form used by forces across the country to apply for his licence, disclosing any medical conditions and convictions, as well as providing a person to act as a referee. “There are a lot of people that shoot within the UK and the vast, vast majority pose absolutely no danger whatsoever to public safety or to the peace,” Mr Davis said.

“There are high risk decisions such as if a person has been previously refused to previously revoked – the decision to issue that licence is potentially high risk. Someone who has been involved in domestic violence or other behaviour, someone who has had their guns taken off them, which could be a voluntary surrender – there are many different circumstances.”

High risk decisions should be taken by the force’s firearms licencing manager or a more senior officer in certain circumstances, he added. Applicants must declare if they have certain medical conditions – such as acute stress reaction, depression, anxiety, drink or drug issues – and neurological conditions including epilepsy and Parkinson’s disease.

The inquest heard Davison declared that he had autism on his application and gave consent for his GP to share information with police about his medical history. However, Davison’s GP refused to provide an opinion to police assessing whether Davison should be issued with a shotgun certificate.

Chief Superintendent Roy Linden, of Devon and Cornwall Police, spoke directly to the families at the inquest as he began his evidence. He described how the victims had “needlessly lost their lives” and said the force recognised the “trauma” suffered by their families.

“It is our intention that this tragic incident will serve to drive improvements in firearms licencing both in Devon and Cornwall and nationally,” Mr Linden said. Mr Linden described Devon and Cornwall Police as a “large rural force” and said it had the largest number of certificate holders in the UK.