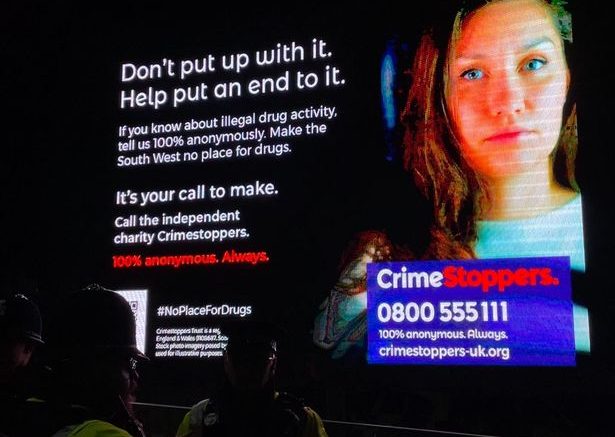 Drugs dealers – and users – in Plymouth’s pub and clubland were the target of police taking part in a region wide operation on Friday night.

Operation Scorpion – instigated by five Police and Crime Commissioners in South West England – has seen a shift in focus with police engaging drug users as well as dealers.

Avon and Somerset, Dorset, Devon and Cornwall, Wiltshire and Gloucester forces are being joined by British Transport Police for a series of crackdowns in the night-time economy and on Friday evening it was Plymouth’s turn.

Neighbourhood and response officers who usually patrol the areas of the Barbican, Union Street, North Hill, Bretonside and Mutley Plain were boosted by a mixtures of teams such as Devon and Cornwall’s No Excuse roads policing unit, licensing officers, police and Ministry of Defence dog handlers, plainclothes officers from Project Servator, British Transport Police officers as well as a number of senior officers from the force along with the Police and Crime Commissioner Alison Hernandez.

As part of Operation Scorpion towns centres and cities across the region have been the focus of police activity since November. As part of the operation’s aim, drug users will be offered help and support and encouraged to consider the harmful effects of drugs on health and the violence and criminality involved in the supply chain.

People who use cocaine, cannabis and ecstasy on nights out will be targeted by police throughout the winter as part of the joint operation and police have said they will be robust in their approach.

The five force Commissioners have stated that they will also be challenging the term ‘recreational’ which they say is often used to describe drugs like cocaine and cannabis, saying they prefer to describe them as ‘illegal gateway drugs’.

Following a briefing at Plymouth’s Charles Cross police station, officers were deployed across the Evening and Night Time Economy areas to spread the Operation Scorpion word. Passive drugs dogs were used at the railways station as well as in pubs and clubs in the city centre and high-visibility patrols were carried out.

Plymouth City Council’s Safebus was also out at its usual location, beside the Theatre Royal on Derry’s Cross roundabout, and instead of being in place on Saturday it will remain at the location on all of Friday’s this month, including December 9, 16 and 23.

The bus is staffed by trained paramedics, support staff as well as security staff, provided by Bristol Ambulance Emergency Medical Service. It aims to reduce the number of people who need to attend Derriford Hospital’s A&E department or call 999 without impacting on ambulance service and hospital staffing.

The bus is deemed a safe place which anyone can attend if they have injured themselves, are feeling unwell or are intoxicated. The bus is the result of partnership working between NHS Devon Clinical Commissioning Group, Plymouth City Council and Devon and Cornwall Police. It is also tied into ‘Safer Plymouth’ and linked with key members of the night time economy such as Pubwatch, Best Bar None, Street Pastors and pub and clubs.

During the operation on Friday evening licensing officers entered a number of venues in the early evening, working with licensee holders of the rules and offering advice about dealing with drug use. Door security staff were also described by police as a key part of the collaborative team approach which aims to make nightclubs and pubs safe environments for revellers.

Passive drugs dog Skye and handler Pc Steve Waters entered a number of venues and at one location plainclothes officers stopped and searched a man who appeared to try and race out of the premises at the sight of the two-and-a-half year old dog.

Pc Waters said Skye was trained to search for a range of drugs including cannabis, cocaine, crack cocaine, ketamine, heroin, Ecstasy and methedrone. However, he explained that it was invariably the responses to the unexpected arrival of passive drugs dogs which was the most telling behaviour of those who may be in possession of illicit narcotic.

Insp Paul Laity, who was working as silver command for the regular ‘Operation Expound’ which deals with the usual Evening and Night Time Economy policing process, said he would usually have around 15 officers at most at his disposal, but the additional resources for Operation Scorpion had boosted that to somewhere between 30 and 40 officers.

He said: “We have been aided by a large number of specialist teams and partner agencies, from passive drugs dogs and drugs search dogs, to BTP officers, the No Excuse team, roads policing, Ministry of Defence dogs, Project Servator staff, licensing, Special Constabulary, PCSOs, the Financial Investigations Unit and even officers from the Serious and Organised Crime Team (SOCIT).

“People should keep in mind that the supply and use of drugs has other associated offences linked to it, including violence, physical assault, sexual assaults, exploitation, the use of weapons, threatening behaviour, antisocial behaviour.

“We want places like Plymouth to be known as a safe place for people to enjoy themselves. We want to retain the Purple Flag which we have earned.

“It should be remembered that there are many people who work in the Evening and Night Time Economy, such as bar staff, waiting staff, door staff, taxi drivers, taxi marshals and PARC rangers. In addition to that we have so many people who offer their time and skills for free – volunteers including the University of Plymouth’s [Night Patrol] first responders and Street Pastors.

“All of them are out on nights like tonight ensuring that Plymouth is a place where everyone can enjoy a safe night out.

“The usual Operation Expound work includes dealing with the ongoing issue of violence against women and girls and we are in the midst of a 16 days of activism campaign to highlight the issue. Our work will continue to target predatory behaviour, particularly certain males who shouldn’t be in the city centre, who have bail conditions banning them from parts of the city and which can be checked on during the night.

“We are ensuring our officers look for the tell-tale signs, be professionally curious about some males’ behaviour and ask the difficult questions.”

Police and Crime Commissioner for Devon, Cornwall and the Isles of Scilly Alison Hernandez said: “We are ready in our region for Operation Scorpion which is back with a sting in its tail.

“This is not to say that policing drug dealing and consumption isn’t a part of our force’s daily operational activity, but that this is a reminder to everyone that the South West is a hostile environment for drug dealers. We are working together across boundaries and using all the tools and resources available to show that the police are listening to their communities.

“This winter we are focusing particularly on drugs around the night-time economy to send a clear message to those who think snorting a line of coke or smoking cannabis is a fun thing to do. We are asking them to reflect not only on the harm they are doing to themselves, but also on the supply chain of misery, exploitation and criminality that their money is supporting.

“These ‘party drugs’ can be glamorised or associated with users who may appear more affluent, but this message is about making it clear, if you are engaging with illegal drug activity then you are helping support criminal networks that run county lines, which exploits vulnerable children by involving them in the storing and transportation of drugs.”

Operation Scorpion activity in the region has so far resulted in 127 arrests and 465 disruptions to drugs lines. More than £180k, weapons and drugs have been seized. A total of 297 vulnerable people have been safeguarded and offered support.

If you have been a victim of crime please report it to police, in an emergency call 999 or in a non emergency call 101, webchat or email the police via devon-cornwall.police.uk.